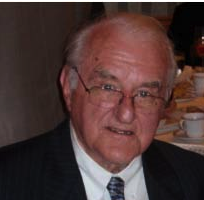 Frederick Heldring was born in Amsterdam, Holland in 1924. After graduating from high school during the German occupation of his country he joined the Underground in 1944. One of his tasks was to assist Jews in their hiding places. In 1950 he emigrated to the United States. He graduated from the University of Pennsylvania in 1951 after having studied economics in Amsterdam for two years.

While studying at the University of Pennsylvania he worked on a part time basis at the Philadelphia National Bank. After graduation he worked in the foreign department of the bank for twenty years. In 1974 he was appointed President of PNB. From 1986 he was Chairman until he retired in 1989.

Mr. Heldring met Colette Barr from Chicago in Mexico in 1953. They were married in 1954. They have seven children and fourteen grandchildren.