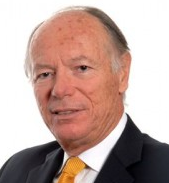 Mr. Chevallier has 36 years of experience in asset management and strategy. He earned a CET in 1969 and an MBA from the University of Chicago in 1973.