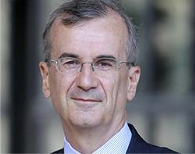 François Villeroy de Galhau was born in Strasbourg on 24 February 1959. His family roots are in Lorraine and Saarland.

François Villeroy de Galhau is an ENA graduate and a former Inspector of Finance. In 1988, he joined the French Treasury (Africa desk, then Europe desk), then served as European advisor to the Minister of Finance and the Prime Minister (Pierre Bérégovoy) from 1990 to 1993. He held various posts at the French Treasury, then became financial advisor at the Permanent Representation of France in Brussels. From 1997 to 2000, he was chief of staff of the Minister of the Economy, Finance and Industry (Dominique Strauss-Kahn then Christian Sautter). He was head of the General Tax Directorate from 2000 to 2003.

In 2003, he became the Chief Executive Officer of Cetelem, then headed the retail banking activities of BNP Paribas in France (2008). François Villeroy de Galhau served as Chief Operating Officer of the BNP Paribas group, in charge of domestic markets and of corporate social responsibility, from 1 December 2011 until May 2015, when the French government entrusted him with an assignment on corporate investment financing.

In September 2015, the President of the French Republic put forward his candidacy for the position of Governor of the Banque de France. After being approved by Parliament, he was appointed Governor of the Banque de France at the Cabinet meeting of 30 September 2015 and will take office on 1 November 2015. He has notably published « 18 leçons sur la politique économique » (Seuil, 2003 and 2006) and « L’espérance d’un Européen » (Odile Jacob, 2014).