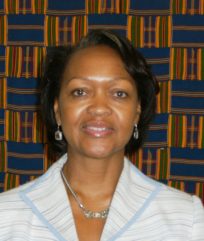 Florizelle (Florie) Liser is the Assistant U.S. Trade Representative for Africa in the Office of the United States Trade Representative (USTR). In this position, she leads U.S. trade efforts and investment in sub-Saharan Africa and oversees implementation of the African Growth and Opportunity Act (AGOA). She also leads interagency negotiation and implementation of a number of trade and investment agreements with Sub-Saharan African nations.

Ms. Liser has an extensive background in trade negotiations and Africa. From 2000-2003, she served as Assistant U.S. Trade Representative for Industry, Market Access, and Telecommunications. In that position, she was responsible for developing and coordinating U.S. trade policy as it affects industrial and manufacturing interests – including telecommunications, electronic commerce, steel, chemicals, forest products, semiconductors, aircraft, and shipbuilding, among others. She also coordinated industrial market access negotiations in bilateral and regional free trade agreements and in the WTO.

Ms. Liser worked at the Department of Transportation from 1987-2000 as senior trade policy advisor in the Office of International Transportation and Trade. In this capacity, Ms. Liser coordinated trade and transportation issues of importance to developing countries, with a particular focus on Africa. She organized the first U.S.-Africa Transportation Ministerial, helped in developing the Safe Skies for Africa initiative, and played a key role in preparing former Secretary of Transportation Rodney Slater for a number of trips to Africa.

From 1980 to 1987, Ms. Liser worked in the USTR GATT Affairs office on WTO developing country trade issues, including the Committees on Trade and Development, Least Developed Countries, and Balance-of-Payments

As an Associate Fellow at the Overseas Development Council (ODC) from 1975-1980, Ms. Liser served as the ODC source person on Africa and organized seminars on relevant African issues related to ODC’s mission of increasing official development assistance to and improving U.S. trade relations with developing countries.

Ms. Liser was a founding member of TransAfrica (participating in the early planning sessions for its national launch), former co-chair of the Education Committee of the Washington, DC Chapter of TransAfrica, and has over many years been actively involved in promoting trade and development policies that recognize Africa’s growing importance to the U.S. and its African-American citizens.