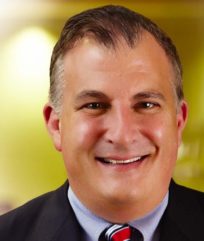 Ernest (Ernie) Dianastasis is Managing Director of CAI’s Delaware Valley Operation and is a principal in the company. CAI is a global Information Technology (IT) consulting, integration and outsourcing services organization that focuses on IT productivity with over 4,500 associates world-wide.

In this role, Ernie is responsible for a major portion of CAI’s activities including Sales, Marketing, Consulting, Delivery, and Quality. This operation is headquartered in Newark, Delaware and serves the greater Delaware Valley. Under Ernie’s leadership, the Delaware Valley operation has grown from 1 to 1,400+ associates, making CAI one of the three largest IT firms in the Delaware Valley (The Philadelphia Business Journal, 2012, 2013 & 2014). Ernie is also responsible for CAI’s business in Ohio and Michigan and oversees CAI’s operations in Shanghai, China, which opened in 2005.

In addition to being a successful business leader and entrepreneur, Ernie has a passion for the community and is extremely active within the region.

Ernie is Chairman of First State Innovation; a private sector led non-profit initiative to foster a more entrepreneurial environment in Delaware. As Chairman of a 20-person board representing the private, public and academic sectors, he is the driving force behind this effort to accelerate the growth of Delaware’s entrepreneurial economy. First State Innovation is closely aligned with the Council on Competitiveness in Washington, D.C., to which Ernie also belongs.  He was also elected to the Board of the State Science Technology Institute (SSTI) in 2008, serving with former Governor’s Michael Dukakis & John Engler to promote technology incubators nationally.

Ernie also serves on the Board of Directors of the University City Science Center, which is the largest urban business incubator in the country, located in Philadelphia, PA.

He has been a member of The Delaware Business Roundtable since 2001 and currently serves as immediate past-Chairman. He is a member of the Delaware State Chamber Board of Directors and also serves as the Chairman of the State of Delaware’s Vision 2015 effort focusing on improving the future of public education in Delaware. He also serves on the boards of the Greater Philadelphia Chamber of Commerce, and Select Greater Philadelphia’s Strategic Operating Committee. He has also served from 2009-2012 on the Board of Leadership Delaware. Ernie also serves on The Federal Reserve Bank of Philadelphia’s Economic Advisory Council.  In 2011 Ernie was recognized by the Delmarva Chapter of the Boy Scouts of America as Citizen of the Year.

Ernie and CAI are involved in a number of local charitable causes. He is a board member and former Chairman of the Board for Easter Seals of Delaware and Maryland’s Eastern Shore. Since 2005, CAI has been the title sponsor for the CAI / Easter Seals Volleyball Challenge, Easter Seal’s major annual fundraiser. He is also Chairman of the Board for Saint Edmond’s Academy, an independent, Catholic school for boys in Wilmington, DE.

Prior to joining CAI Ernie was with the IBM Corporation. He earned a B.S. degree in Finance and an M.B.A. in Management from Lehigh University, and remains active in supporting numerous university initiatives.

Ernie and his wife Jennifer reside in Wilmington, Delaware, with their two children, John (Jack) and Paisley.