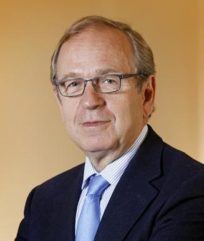 Governor of the Bank of Finland

Mr. Erkki Liikanen, MPolSc (Econ.), has been Governor of the Bank of Finland since 2004. He is currently serving his second 7-year term.

Mr. Liikanen, a former EU Commissioner, Ambassador and Minister of Finance, is one of the longest serving members of the Governing Council of the European Central Bank. He is Chairman of the ECB Audit Committee, with a mandate to enhance the corporate governance of the ECB and the Eurosystem. He is also Governor of the International Monetary Fund for Finland.

Mr. Liikanen is so far the youngest person ever to become a member of the Finnish Parliament, starting his parliamentary career in 1971 at the age of 21.

Mr. Liikanen is married to Hanna-Liisa Liikanen PhD. They have two daughters.

An active member of civil society, Mr. Liikanen served as President of the Finnish Red Cross in 2008–2014.