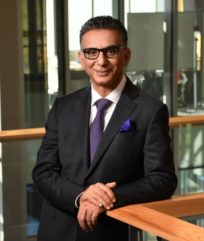 Dr. Ali A. Houshmand became Rowan University’s seventh president in 2012 after serving for approximately six years as provost/senior vice president, CEO and interim president. Houshmand is a dynamic leader whose personal connection with students, employees, alumni, government leaders, the business community and the public has become a hallmark of his presidency. A lifelong believer in the power of education, Houshmand holds master’s and doctoral degrees in industrial and operations engineering. His entrepreneurial approach to higher education has focused on four goals: increasing access, improving quality, ensuring affordability and promoting economic development. His success is evident. Under Houshmand, Rowan has evolved from a well-regarded state school to a rising Carnegie-classified national research university with two medical schools. Enrollment has grown from 11,000 students in 2012 to 19,600 students for Fall 2019, making Rowan the fourth fastest-growing research university in the U.S.

With his entrepreneurial perspective, Houshmand has been instrumental in fostering public-private partnerships and creating new opportunities to collaborate with business and industry on research, relevant education that leads to productive, responsive careers and economic development. He is deliberate about strategic growth, public stewardship and the University becoming financially self-reliant. Rowan’s workforce has grown by 125 percent in 10 years, a key indicator of the institution’s vitality and a major contributor to Rowan’s $1.53B statewide economic impact. Early in his tenure, Houshmand drove the creation of Rowan’s self-funded Division of Global Learning & Partnerships, which offers students a variety of ever-growing graduate and degree completion options that include online and hybrid programs. He partnered with community college leaders in Gloucester, Cumberland and Burlington counties to develop programs in which students at those schools may earn a Rowan bachelor’s degree for $25,000. In the unique partnerships, the schools remain independent but adopted the names Rowan College of South Jersey-Gloucester County, Rowan College of South Jersey-Cumberland Campus and Rowan College at Burlington County to reflect their close relationship to the University. With 28 degree programs in place and planned, the partner schools are growing, bucking downward enrollment trends at other institutions.

In 2012, Houshmand oversaw the opening of Cooper Medical School of Rowan University (CMSRU) in Camden and, in 2013, the integration of the School of Osteopathic Medicine (SOM) in Stratford from the former University of Medicine and Dentistry of New Jersey (UMDNJ). With both schools part of Rowan, the University became just the second in the nation to offer both M.D.- and D.O.-granting medical programs. Under Houshmand, Rowan is also partnering with Rutgers- Camden to develop a research hub in the life sciences in the City of Camden. In 2017, the University, committed $50 million to support research there. The $70 million Joint Health Sciences Center in Camden houses classrooms, medical simulations, laboratories and research facilities for Rowan, Rutgers and Camden County College.

To keep Rowan education affordable, Houshmand committed to not raising under- graduate tuition beyond the projected rate of inflation, a promise he has kept since 2014.

Active in reshaping virtually all aspects of the University, Houshmand has helped guide the success of Rowan Boulevard, a $426 million collaboration between Rowan, private developers and the Borough of Glassboro that, since 2008, has created a new downtown with housing, retail, restaurant and academic space. In less than 10 years, Rowan Boulevard has become a regional destination with restaurants, a Barnes & Noble University Bookstore, entertainment attractions and a new Marriott Hotel & Conference Center, the first new Glassboro hotel in generations.

Applied research a priority throughout curriculum

Undergraduate education is at the core of Rowan University’s mission. As research at Rowan grows, the University is keenly committed to applied research that solves real-world problems at the intersection of engineering, business, science, technology and medicine. The University regularly partners with business and industry to address regional, national and global concerns.

From poverty to presidency

Raised in a family of 10 children in Iran, Houshmand embraced education as a way to a better life. He earned his bachelor’s degree in mathematics and his first master’s degree in mathematical statistics from the University of Essex in the United Kingdom. He earned a second master’s and a doctoral degree in industrial and operations engineering from the University of Michigan, Ann Arbor.

After earning his doctorate, Houshmand worked as a staff analyst for United Airlines, developing large-scale optimization and forecasting models. Leaving industry for academia, he joined the University of Cincinnati and, later, Drexel University, where he taught and held various administrative positions before joining Rowan as provost in 2006.

Houshmand lives in Harrison Township, N.J., with his wife, Farah. They have two adult children.