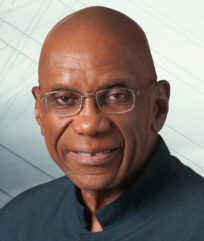 Former Governor of the Central Bank of Barbados

Dr. DeLisle Worrell is the immediate past Governor of the Central Bank of Barbados, having served from November 2009 until February 2017.

He was appointed a member of the Financial Policy Council of the Bermuda Monetary Authority on July 1, 2018.

Dr. Worrell, an Economist, founded the Research Department of the Central Bank in 1973, and served with the Bank until 1998, by which time he was Deputy Governor with responsibilities for research, management information systems and banking supervision.

Dr. Worrell is a member of the Bretton Woods Committee (www.brettonwoods.org), a network of prominent global citizens which works to demonstrate the value of international cooperation and to foster strong, effective Bretton Woods institutions. He has held research fellowships at the Smithsonian Institution, the Peterson Institute, the Federal Reserve Board in Washington, Yale University, Princeton University and the University of the West Indies.  He has been consultant to the Inter-American Development Bank, the Foundation for Development Cooperation in Brisbane, Australia, the U.S. Agency for International Development, the World Bank, the UN Economic and Social Council and the Caribbean Community Secretariat.  He was general chairperson of the International Symposium on Forecasting 1997, and a member of the programme committee of the International Economic Association Moscow congress of 1992.

Between 1998 and 2008 Dr. Worrell worked with the International Monetary Fund, focusing on monetary policy, financial stability and stress testing in countries in Europe, Asia, Africa and the Caribbean.

More recently, Dr. Worrell served as the Executive Director of the Caribbean Centre for Money and Finance (CCMF).

Dr. Worrell is the author of Policies for Stabilization and Growth in Small Very Open Economies (Group of Thirty, Washington D C, 2012) and Small Island Economies (Praeger Publishers, 1987). His publications on money and banking, exchange rate policy and the balance of payments, fiscal policy, the economic implications of size, and the comparative economic performance of Caribbean and South Pacific economies, may be found on the websites of the International Monetary Fund, the Central Bank of Barbados, the Caribbean Centre for Money and Finance, and international journals and publications.  Dr. Worrell holds a Bachelor of Science Degree in Economics from U.W.I. and a Ph.D. in the same discipline from McGill University.