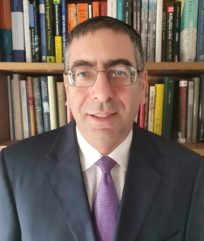 Dr. Daniel Schiffman (B.A., New York University; M.A. and Ph.D., Columbia University) specializes in economic history and the history of economic thought. He has published on US Railroads in the Great Depression, Jewish monetary thought, and the influence of foreign economic advisors on Israel’s economic policy.

His book, The Role of Economic Advisors in Israel’s Economic Policy: Crises, Reform and Stabilization (with Warren Young and Yaron Zelekha; Springer) documents the policy impacts of Michal Kalecki, Abba Lerner, Richard Kahn, Milton Friedman, Herbert Stein and Stanley Fischer, based on extensive archival and historical research. One of the book’s major contributions is that it tells, for the very first time, the true story regarding Milton Friedman’s visit to Israel in 1977, and conclusively debunks the myth that Friedman was responsible for the disastrous economic policies of 1977-1979.