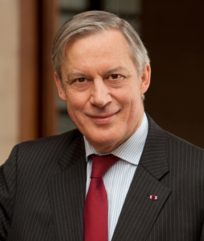 Christian Noyer was born in 1950 near Paris. After obtaining a Bachelor of Laws (LL.B.), he received a Master’s Degree in Public Administration from the Paris Institute of Political Studies (“Sciences Po”). He then joined the Ecole Nationale d’Administration (ENA), of which he is a graduate.

He entered the French Treasury in 1976, and spent two years in 1980-82 in Brussels as a financial attache at the French Delegation to the European Union. Back at the Treasury, he held various positions, dealing both with domestic and international affairs, and was appointed Director of the Treasury in 1993. He also served as an adviser to Mr .Balladur, then Minister of Finance, in 1986-88, and as chief of staff to two other Finance Ministers in 1993 and 1995-97. He was then appointed Vice President of the European Central Bank (ECB) in 1998, when the Bank was set-up in Frankfurt, where he served until 2002. He was Governor of the Banque de France from November 2003 until November 2015. He was also elected Chairman of the Board of Directors of the Bank for International Settlements (BIS) from 2010 until 2015.