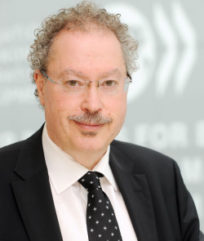 Christian Kastrop is Director of the Policy Studies Branch of the Economics Department of the OECD.

He was formerly Deputy-Director General, Economics and Strategy Department and Director of Public Finance, Macroeconomics and Research Directorate in the Federal Ministry of Finance, Berlin, Germany.

In 1989 he joined the German Ministry of Finance and worked as a Senior Economist; as Director of the Press and Communications Division; the Fiscal Policy Division; the Public Finance Directorate; the EMU Directorate and the International Directorate.

He is Lecturer in Public Finance/Institutional Design and Fiscal Policy at the Free University of Berlin and at the Hertie School of Governance, Berlin. He is also a political fellow of the Cologne Institute of Public Finance, German State member for the Brussels-based think-tank BRUEGEL and Program Committee Member of SAFE (Sustainable Architecture for Finance in Europe) based in Frankfurt.