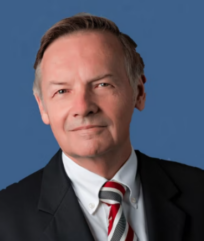 G. William Hoagland is a BPC senior vice president. In this capacity, he helps direct and manage fiscal, health, and economic policy analyses.

Before joining BPC in September 2012, Hoagland served as vice president of public policy for CIGNA Corporation, working with business leaders, trade associations, business coalitions, and interest groups to develop CIGNA policy on health care reform issues at both the federal and state levels.

Prior to joining CIGNA, Hoagland completed 33 years of federal government service, including 25 years on the U.S. Senate staff. From 2003 to 2007, he served as the director of budget and appropriations in the office of Senate Majority Leader Bill Frist. He assisted in evaluating the fiscal impact of major legislation and helped to coordinate budget policy for the Senate leadership.

From 1982 to 2003, Hoagland served as a staff member and director of the Senate Budget Committee, reporting to U.S. Sen. Pete V. Domenici, chairman and ranking member of the committee during this period. He participated in major federal budget negotiations, including the 1985 Gramm-Rudman-Hollings Budget Deficit Reduction Act, the 1990 Omnibus Budget Reconciliation Act, and the historic 1997 Balanced Budget Agreement.

In 1981, he served as the administrator of the Department of Agriculture’s Food and Nutrition Service and as a special assistant to the Secretary of Agriculture. He was one of the first employees of the Congressional Budget Office in 1975, working with its first director, Alice Rivlin.

In both 1997 and 2005, National Journal listed him as one of the “Washington 100 Decision Makers” and referred to him as a “bottom-liner who is not a hard-liner.” Roll Call consistently named Hoagland as one of the top 50 Hill staffers. In 2002, he received the James L. Blum Award for Distinguished Service in Budgeting. The National Association of State Budget Officers honored him in 2004 with its Leadership in Budgeting Award, and in 2006 he was inducted as a fellow in the National Academy of Public Administration.

Hoagland is an affiliate professor of public policy at the George Mason University and a board member of the Committee for a Responsible Federal Budget, the National Academy of Social Insurance, and the National Advisory Committee to the Workplace Flexibility 2010 Commission. In 2009, he was appointed to the Peterson-Pew Commission on Budget Reform examining the overall structure of the budget, authorization, and appropriations process, and was a member of BPC’s Debt Reduction Task Force that published Restoring America’s Future in November 2010. He coordinated BPC’s 2013 report, A Bipartisan Rx for Patient-Centered Care and System-Wide Cost Containment. In April 2015, he co-chaired the National Academy of Social Insurance report, “Addressing Pricing Power in Health Care Markets.”

Hoagland attended the U.S. Merchant Marine Academy and holds degrees from Purdue University and The Pennsylvania State University. His family’s Indiana family farm was recognized as a “Hoosier Homestead” for having remained in the family for over a century.