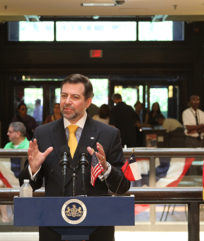 Mr. Leavenworth has over 20 years of professional experience in Latin America, from governmental roles to entrepreneurial ventures and finance. He is a founding partner of Afina and is primarily focused on managing and developing the firm’s relationships. Mr. Leavenworth also serves as Honorary Consul of Chile in Philadelphia with a jurisdiction that includes the states of Pennsylvania, Delaware and southern New Jersey.

Prior to co-founding Afina in 2011, he founded Chispa Group LLC, an international consulting services firm, where he was involved in many different sectors and consulted on multi-billion dollar mining, energy, agriculture, and government projects. Previously, Mr. Leavenworth developed the first Chilean branded beef program for the US market, successfully establishing it as the largest supplier of grass-fed beef to Whole Foods Market. In addition, he co-founded Cono Sur, an affiliate of Chile’s largest wine company, where he developed distribution channels throughout Latin America and Canada. Cono Sur currently exports more than one million cases of wine per year and is one of the top four wine companies in Chile. Leavenworth also helped lead the creation of the small business banking unit at Citibank while based out of Santiago, Chile.

In 2005, the President of Chile appointed Mr. Leavenworth the Honorary Consul of Chile in Philadelphia. He also serves on the boards of the Chilean & American Chamber of Commerce, Global Interdependence Center, Pan American Association and the Consular Corps Association of Philadelphia. In 2016, Leavenworth was appointed president of the board of Pata Foods, a leading organic baby food manufacturer. Mr. Leavenworth graduated from Hamilton College with a Bachelor of Arts degree in Latin American Studies. He was born in Mexico and is fluent in Spanish.