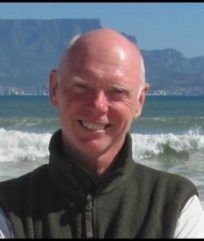 Journalist, educator, author Barry D. Wood is Washington correspondent for RTHK radio in Hong Kong and writes the American View column on the global economy. His opinion, travel and architecture pieces were featured on marketwatch.com and USA Today. He has written for the New York Times, Washington Post, Financial Times, and The International Economy.

In the mid 1990s Barry was based in Prague covering the formation of free markets in post-communist Europe. His 2017 book, Exploring New Europe, focuses on ordinary people met during a 2,500-mile bicycle journey from Estonia to Albania. Barry began journalism in southern Africa as a radio correspondent for NBC News and the Financial Mail magazine in Johannesburg. He witnessed Mozambique and Angola’s independence from Portugal and was in Soweto on the first day of the June 1976 uprising. He returns regularly to South Africa as well as Zimbabwe, Mozambique and Namibia. In 2011 and 2012 Barry was a guest lecturer at Kingswood College in South Africa’s Eastern Cape Province. He has instructed high school and middle school classes In Washington, DC with a focus on financial literacy. While teaching race relations at Western Michigan University, Barry co-founded the Urban Education Project, a multi-disciplinary program connecting prospective teachers with low-achieving schools.  He taught junior and senior high school in Kalamazoo and economics at Northern Michigan University.

Barry holds BA and MA degrees from Western Michigan with additional study at Oxford and in Yugoslavia. Twice he analyzed privatization in eastern Europe as a short-term scholar at the Woodrow Wilson Center. At age 19 in San Francisco Barry was a deck hand aboard a Swedish freighter for a five-month voyage to Australia and back. Later he worked aboard Norwegian and Dutch transatlantic liners. In Stockholm he spent six weeks as a trainee in the foreign exchange department of Svenska Handelsbanken. More at econbarry.com