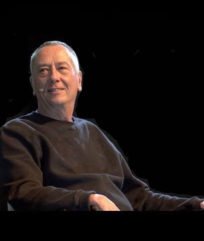 Barry is an Emmy and Academy Award winning writer/producer best known for his original story and screenplay for the 1988 Best Picture Rain Main.  Early film projects related to disabilities, child and elder abuse led Barry to become an advocate for marginalized groups, and he received a lifetime achievement award from the National Association of Social Workers. Several of Morrow’s scripts are inspired by real people, especially people with disabilities and extraordinary talents. These include the savant played by Dustin Hoffman in the film Rain Man, inspired by the real savant Kim Peek, and Bill Sackter, played by Mickey Rooney in the TV movie Bill. Both works received writing Oscar, Emmy and other awards for Morrow and for the actors who portrayed them. Morrow gave his Oscar statuette as a gift to Kim Peek. After Kim passed away in Morrow put his Oscar statuette on permanent loan to Salt Lake City in Kim’s memory, and put forward the money for the Peek Award, which “pays tribute to artists, media makers, and film subjects who are positively impacting our society’s perception of people with disabilities” and is given out by the Utah Film Center.