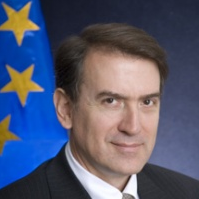 Mr. Angelos Pangratis [Pagkratis] is the ambassador and head of the Permanent Mission of the EU to the WTO.

Angelos Pangratis was the deputy head of the Delegation of the European Union (previously, to Dec. 2009, of the European Commission) to the United States, in Washington, D.C. from August 2005 to December 2010. Before that, he served as acting head and chargé d’affaires of the Delegation to the US and designated permanent observer to the Organisation of American States from October 2009 to July 2010.

Highlights of Mr. Pangratis’ career at the EU’s headquarters in Brussels, Belgium, include head of unit responsible for relations with China, Hong Kong, Macao, Taiwan, South Korea and Mongolia (1998-2003); head of unit for personnel and budget of the Directorate General for External Relations and Trade Policy (1997-1998); head of investigation teams of the Anti-Dumping and Anti-Circumvention Division (1987-1990). For several years (1981-90) Mr. Pangratis represented the European Commission at numerous negotiations and working groups at multilateral organizations such as the WTO, OECD, Club de Paris, UNCTAD, and others.

Mr. Pangratis has lectured on European economic, trade, foreign policy and security issues in Argentina, Belgium, the Czech Republic, France, Korea, South Africa, United Kingdom and in the United States at universities, think tanks and other fora. He was a regular lecturer at the US Army War College in Carlisle, Pennsylvania. He has had interviews and articles on EU matters published in many countries.

Angelos Pangratis was born on the island of Corfu, Greece (1956), is married and has three children. Mr. Pangratis speaks Greek, French, English and Spanish. He obtained a doctorate from the University of Paris I, Panthéon Sorbonne in 1983 in international economics, monetary policies and finance. This followed studies in economics, european studies and international law at the Universities of St.-Etienne, Paris I and Paris II.