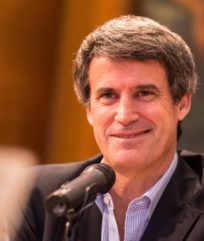 Former President of the Central Bank of Argentina

Prat-Gay earned a degree in economics from the Universidad Católica Argentina in 1989. He is a PhD candidate the University of Pennsylvania, where he earned his Master´s Degree in Economics in 1994. Shortly afterwards, Prat-Gay joined JPMorgan in New York and went on to work for the bank in its Buenos Aires and London branches until 2001. Back in Buenos Aires, he co-founded APL Economía, an economic consulting firm.

In December 2002, at the age of 37, he was named president of the Central Bank of Argentina and served until September 24, 2004. He won the 2004 Euromoney Central Bank Governor of the Year award for his work for having reduced inflation from 40% to 4% while maintaining an economic growth of 8%. In the 2009 congressional election, Prat-Gay led the Civic Coalition’s party list for the city of Buenos Aires and was elected to the House. In Congress, he worked on projects such as increasing banking security, preventing money laundering and drug trafficking, and an extensive deregulation of the Argentine financial system.

As the first Finance Minister of the Macri Administration, he swiftly but smoothly removed all capital controls within a week of taking office and brought to an end a 14-year period of sovereign default with private creditors by striking a deal in the NY courts less than 3 months into the job. His tax amnesty bill delivered more than 20% of GDP worth of previously undeclared assets, a world record. These early successes secured him another Euromoney award (Finance Minister of the Year 2016) and, more importantly, allowed the economy to get back on its feet again, helping Macri secure a critical victory in the following mid-term elections. He left long before the government signed to an IMF program which marked a troublesome end to the Macri Administration.