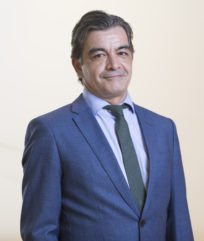 Aitor Erce is a Principal Economist at the European Stability Mechanism. He is also a research affiliate with the Federal Reserve Bank of Dallas and former research economist at the General Directorate of International Affairs of the Bank of Spain. Through the positions held, both at the Bank of Spain, since 2006, and the European Stability Mechanism, since 2013, Aitor has been involved in the evaluation and design of international financial policies, including related to debt sustainability analysis, the design of official lending programs and the development of tools for the early detection of risks to sovereigns’ market access. In addition, during his time at the European Stability Mechanism, Aitor has helped develop the institution’s research capabilities, including through organising workshops and a regular seminar series, and designing and managing the Working Paper Series.

Aitor scholarly interests range from international finance and the design of official interventions during crises, to fiscal policy and economic development. His research has been published in journals like the Journal of Monetary Economics, IMF Economic Review, or the Journal of International Money and Finance. In turn, the policy-oriented side of his research has been published in journals such as Governance, Oxford Economic Papers, or the Capital Markets Law Journal. Aitor holds an MSc from CEMFI and a PhD from the European University Institute.