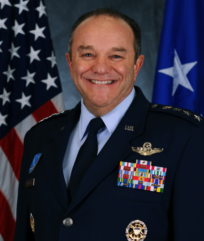 General Breedlove was raised in Forest Park, Ga., and was commissioned in 1977 as a distinguished graduate of Georgia Tech’s ROTC program. He has been assigned to numerous operational, command and staff positions, and has completed nine overseas tours, including two remote tours. He has commanded a fighter squadron, an operations group, three fighter wings, and a numbered air force. Additionally, he has served as Vice Chief of Staff of the U.S. Air Force, Washington, D.C. Operations Officer in the Pacific Command Division on the Joint Staff; Executive Officer to the Commander of Headquarters Air Combat Command; the Senior Military Assistant to the Secretary of the Air Force; and Vice Director for Strategic Plans and Policy on the Joint Staff.

Prior to assuming his current position, General Breedlove served as the Commander, U.S. Air Forces in Europe; Commander, U.S. Air Forces Africa; Commander, Air Component Command, Ramstein; and Director, Joint Air Power Competence Centre, Kalkar, Germany. He was responsible for Air Forces activities, conducted through 3rd Air Force, in an area of operations covering more than 19 million square miles. This area included 105 countries in Europe, Africa, Asia and the Middle East, and the Arctic and Atlantic oceans. As Vice Chief, he presided over the Air Staff and served as a member of the Joint Chiefs of Staff Requirements Oversight Council and Deputy Advisory Working Group. He assisted the Chief of Staff with organizing, training, and equipping of 680,000 active-duty, Guard, Reserve and civilian forces serving in the United States and overseas. General Breedlove has flown combat missions in Operation Joint Forge/Joint Guardian. He is a command pilot with 3,500 flying hours, primarily in the F-16.