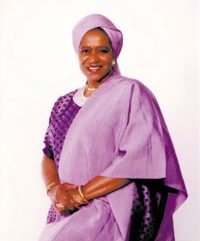 H.E. Dr. Erieka Bennett has traveled, worked and lived in Africa for over 35 years. As the Convening Founder and Head of Mission of the (AU) African Diaspora Forum, The first and only diplomatic embassy in the world dealing specifically with the Diaspora issues. The role of the Mission is to link Diaspora Africans and their talents to support the development of Africa.  Dr. Bennett has been a valuable asset to the African Union’s development of Diaspora issues.  Dr. Bennett was at the forefront of the development of AGOA and was an advisor to the architects of NEPAD. Also a selected member of the first AU ECOSSOC.

Dr. Bennett’s strong love for the Africa Woman was given concrete expression in March 2004 when she was one of the supporters of African Woman 2004 which produced the Abuja Accords, the historic document on the Aspirations of the African Woman which was developed at the first ever African Woman’s conference held in Abuja, Nigeria, March 2004.  This document is being submitted to Beijing plus ten for forum development and adoption as a major voice for the African woman at the United Nations Forum for women. She was elected as Africa Women 2004” in the category of mentoring.

Dr. Bennett’s devotion to her work as a bridge between the Diaspora and Africa, and her work in promoting Diaspora Affairs, has also earned her quite a number of awards, such as the African Global Leadership Award in London in November 2007, the Trumpet Awards in the United States of America in September 2009, as well as the Pan African Women of Excellence Awards in South Africa in October, 2009.  Recently she received the Visionary Leadership Award 2010 in Washington, D.C.

Dr. Bennett is a trusted Advisor to ECOWAS and she also served on the Advisory Counsel of the Past President of Ghana.   Dr. Bennett assists in providing guidance to the development of this progressive West African nation.   Dr. Bennett has been an informal trusted Advisor to several Presidents.  Dr. Bennett monitors actives of African development through her involvement with international discussions such as the African -African American summits, ECOWAS meetings, AU summits and most recently the World Economic Forum in Davos, Switzerland (where she was one of only two African/ African American women official  participants).

Dr. Bennett is the President of African Communications Agency that convenes a yearly media summit that deals with the Image of Africa.  ACA under Dr. Bennett’s direction was partially responsible for the creation and launching of Inside Africa Show, one of CNN’s most popular shows. ACA was the first communications agency that represented CNN in Africa. Dr. Bennett is a Media Executive specializing in Branding and image strategies.   The Legacy, a pictorial history of President Bill Clinton’s historic linkage to Africa and its development was published under her direction.

Dr. Bennett is a well versed educational facilitator.  Founded “The Bridge Inc.” in 1985, training and consulting firm which creates a viable linkage between Africa and America.   Developed and managed training programs for Government Agencies in various African Countries.  Training and management for Hotels, airlines, – creating new levels of excellence in service standards.

Dr. Bennett counsels regularly a virtual “Who’s Who in Africa” list of clients including Heads of States, Ministers, Ambassadors and prominent businessmen.
Dr. Bennett is recognized the world over for her tremendous charitable contributions, she is generous benefactor of several children’s causes.