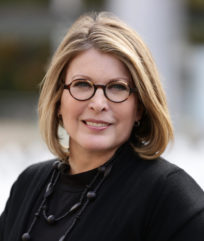 Mary Caraccioli, MBA, is an EMMY™ award winning financial journalist who has hosted and/ or produced programs for ABC, CNBC, FOX and Comcast. Mary’s track record for creating award-winning programs for broadcast, cable and digital mediums has led to her current assignment. She is currently the Chief Communications Officer for the Central Park Conservancy. In this role, Mary is responsible for the direction and leadership of the Conservancy’s marketing, public relations, and internal communications across all platforms, and messaging for all institutional initiatives, programs, and events. Prior to joining the Conservancy, she served as Chief Communications Officer at Lincoln Center for the Performing Arts, and worked as a reporter, broadcast anchor, and news executive at a variety of media outlets, including ABC, CNBC, FOX, Comcast, and Al Jazeera America.

She is the founder and lead contributor of the respected personal financial website TheMoneyConfidante.com.  She has been quoted in O magazine, Parade, Parenting, Inside Edition and many other national and local media outlets.  Mary’s work as a communications expert has helped Fortune 100 companies and university clients achieve high level results across platforms and face to face.