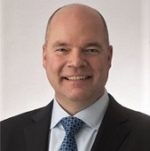 Bill Kennedy is the Chief Investment Officer of Fieldpoint Private and serves on the bank’s Board of Directors. He is responsible for the firm’s investment philosophy, process and platform and chairs the bank’s Investment Committee. He manages discretionary portfolios for clients in addition to the bank’s securities portfolio and authors Fieldpoint Private’s flagship publication, The Point.

Bill has 30 years of financial services experience. He worked at Citigroup’s Tokyo and New York offices from 1996-2008 and was appointed to Citigroup’s Management Committee in 2003. He served as the Global Director of Research for Citigroup Global Markets, Inc. where he led one of the world’s largest research teams with 900 professionals in 24 countries.  Bill also held senior positions at Century Atlantic Capital Management, Guy Carpenter & Company, and the DuPont Pension Fund.

Bill holds a BA in economics and an MBA from Texas Christian University.  He is a CFA® charterholder and a member of the CFA® Society of New York, The Economic Club of New York, the University Club, and serves on the Board of Directors for the Global Interdependence Center, whose mission is to encourage the expansion of global dialogue and free trade in order to improve cooperation and understanding among nation states, with the goal of reducing international conflicts and improving worldwide living standards.