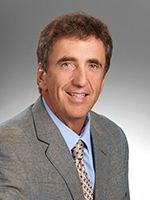 Mike serves as executive chief of staff for CEO Kelby Krabbenhoft at Sanford Health and as vice president for public affairs for the system. He is responsible for developing and implementing a strategy to communicate with various external constituencies in the region regarding the vision, mission and value of an integrated health system, including the coordination of sponsorships, contributions and community memberships.

Mike is a graduate of Augustana College and a former educator and coach in South Dakota high schools for 26 years. He joined Sanford Health in 2002 and become vice president of public affairs in 2008. He was named chief of staff in 2011.