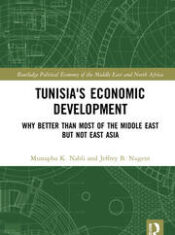 Tunisia’s Economic Development: Why Better than Most of the Middle East but Not East Asia

This book identifies the differences in growth and development, and the various factors lying behind them, across both Middle East and North African (MENA) and East Asian countries over the 1960‒2020 period. It considers a very wide range of factors, compares initial situations, institutions, and government policies, the dynamic responses to changing circumstances, and discusses the inability of the governments of the MENA region to achieve not only political reform, but also the kinds of economic reform that would allow their citizens to prosper in an increasingly globalized world. The book focuses on Tunisia. Since its independence in 1956 until 2010, Tunisia had considerable success relative to many other MENA countries, but was somewhat less successful relative to East Asian countries. Since 2010, however, while transitioning away from autocracy to democracy, it has been in rather serious economic decline. The book highlights how both the factors identified as enabling Tunisia’s initial success and those leading to its subsequent decline can provide many useful insights for improving the management of economic development across the whole MENA region and perhaps also to developing countries throughout the world.