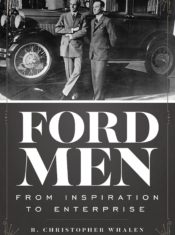 Ford Men: From Inspiration to Enterprise

What is more important in business: strategy or luck? Ford Men answers this question by telling the story of Ford Motor Company, one of the most successful American businesses made up of one of America’s most enduring business families.

Over the years, much of the detail and people in the Ford narrative have been forgotten or airbrushed away by the Ford Motor Co PR machine. Reading most of the hagiographies produced on the subject over the past two decades, you’d think the visionary Henry Ford created this remarkable enterprise alone. The true story is far more complex and represents an important thread in the economic and political history of America in the 20th Century. Managers such as Lee Iacocca and Alan Mulally, investors such as James Couzens and Horace Dodge, and advisors such as Sidney Weinberg, Robert Rubin and John Thornton of Goldman Sachs comprise a rich constellation of personalities that are the Ford Men.

There are three distinct periods and Ford personalities in this epic story: the founder Henry Ford, his grandson Henry Ford II, and great grandson William Clay Ford. Each of these periods includes many other important people and events that tell the story of how this inspiration became a global enterprise. The episodes, personalities and surprising turns of fate combine into one of the great business stories in U.S. history. Ford Men reminds readers of important events and turns of fortune, which comprise the Ford story, events which have been forgotten over the decades and have been resurrected in this fascinating and timely narrative.